I wanted to be writing a gushy review about what a fab evening we’d had watching The 1975 and how you should all rush out and see them. Unfortunately I’m not.

We love live music so Dave bought tickets for us to see The 1975 play in Bangkok last night with a gang of our friends at a venue just down the road from us, actually at the end of our street. Bangkok isn’t too often a stop on bands tours so it was a coup to get to see some live music here so soon!

The band came on at 8pm to a hysterical crowd (…I wondered if we were accidentally at a One Direction gig…who coincidentally are playing in Bangkok soon), and started off strong with The City; big sound and atmospheric staging got everyone moving. Then it went somewhat downhill, it was song after song of sound-the-same melody and was (apologies to any big 1975 fans out there) a tad boring… With the lead singer swigging from a bottle of red wine and preaching at everyone about putting their cameras down, it turned a tad self indulgent. I was in hysterics when he described someone’s girlfriend as ‘peng’….and appeared to forget the words to his piano spotlight bit 3 times, presumably down to excess red wine – how terribly rock ‘n’ roll. The addition of the sax was great…for the first song, then I couldn’t help thinking about Kenny G.

Finally, what 90% of the crowd was there to hear…Sex and Chocolate happened, the crowd went wild…except they didn’t, they listened politely whilst we went all Brit and jumped around like mad folk determined to get our £60 worth from the last 2 songs.

All in all, good start, dire middle and a great finish. I love live music but I was quite disappointed in a band that have been getting rave reviews. I don’t know if this has anything to do with having seen Kasabian in December who quite frankly know how to get a crowd going to an insane level and maintain it but after a de-brief with friends I don’t think so. The best thing about the evening was being there with a great bunch of people who make anything into a great night. 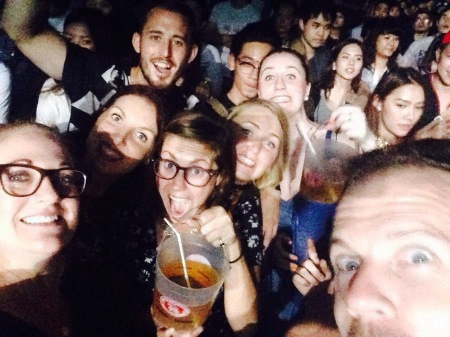 If The 1975 do come back to Bangkok with a second album as they promised, I’ll be giving it a miss. But I will be trying to see Belle & Sebastian next month…and hope I’ll be writing a positive review for you guys!