After an interesting morning at the Visa Office..I won’t go into it but we’re not home and dry just yet, we thought we needed to unwind a bit this evening. They don’t have Nando’s here in Thailand but instead a blatant rip-off called Piri-Piri, we hadn’t been before or really heard any reviews but it filled the brief for an evening of comfort food.

We took the BTS into town getting off at Asok and heading into Terminal 21 mall. It was heaving with some sort of ‘Seventeen’ magazine Valentines event and thousands of screaming teenage girls. Anyway I digress. We headed straight up to Piri Piri and took a seat. The menu includes chicken, burgers, pasta and salads…Tom and I opted for half a Piri Piri chicken each (195THB), Dave a double Piri chicken burger with extra cheese and pineapple (340THB). Unlike Nandos in the UK, there is no option of sides here; everything comes with chips and salad.

The food was actually really good. My chicken was as good if not better than Nandos in terms of chicken-y tastiness and Dave’s burger (aside from a  substandard Thai burger bun) was also praised. They were a tad stingy on the chips so we ordered an extra portion, never the end of the world! If you fancy some good old chicken and chips I would highly recommend this place, there’s a few dotted around Bangkok so keep your eyes peeled. The only thing missing was some coleslaw!

Continuing the ‘comfort food’ theme, we headed over to Swensen’s Ice-cream parlour, also in Terminal 21, although these are everywhere in Bangkok. They originate from San Francisco and basically just do ice-cream sundaes! The menu is ridiculous…I felt like a 12 year old in ice-cream heaven! 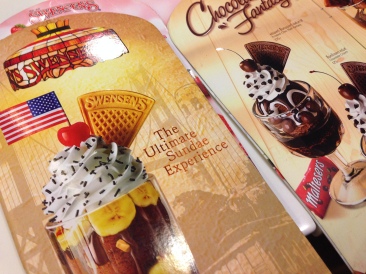 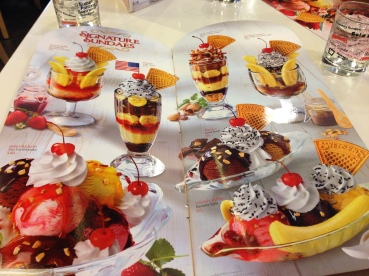 I chose a Hot Fudge something (75THB), Dave a Sticky Chocky something (75THB) and Tom a Chocky Malted something (125 THB). I was too excited I totally didn’t pay attention to what anything was actually called! They don’t appear to do beverages other than the glass of iced water they give you on arrival. 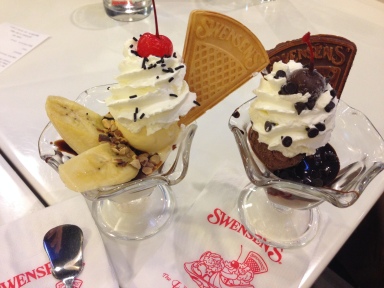 Swensen’s does seriously good ice-cream. All 3 were delicious; great ice-cream and yummy toppings. I will be taking anyone who visits us for some sundae action – you’re never too old!

I’ve spoken about Terminal 21 mall before and how each floor is themed on a country. As we walked through today I took some pictures to show you what I was chatting on about – here is San Francisco and London…if you couldn’t guess!! 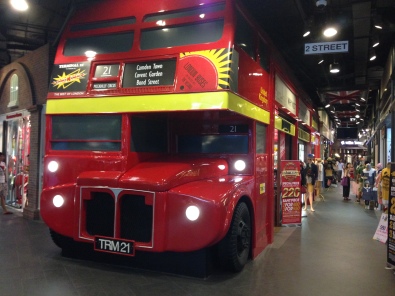 Anyway that was our Thursday, certainly more interesting than usual! Roll on Friday and the weekend…..eeeekkk it’s my birthday and we’re heading to the beach!