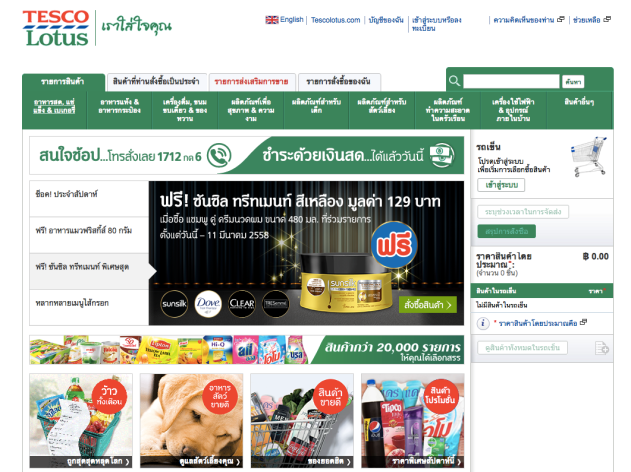 The process of taking taxis to and from the supermarket is simply a pain. We don’t have a supermarket within walking distance, just lots of 7/11’s which basically just stock ‘plastic’ food and the markets which being truthful I haven’t been brave enough to properly shop in yet, so its something we have endured. That was until we bumped into someone in our complex who was popping down to accept their Tesco’s delivery….cha ching, problem solved!

So to get started (once I’d set the website to English of course!) I had to create an account and try and enter our address into the predetermined fields, easier said than done – I did not know we had a postcode!

Anyway, I managed to set up an account and it even recognised it against Dave’s clubcard! Then the shopping started…most things were really obvious and simple to add but certain things like fruit and veg you ordered in weight….well, obviously I had no idea on this so picked a number and crossed my fingers! As well as meat and veg, I ordered the annoying heavy things like iced-tea, cans and fruit juice that we tend to buy as an when we need from the 7-11, which is not particularly cost effective!

So having placed my order on Tuesday, it was delivered yesterday in a refrigerated van, between the hours of 12 and 2pm; 12.20 to be specific. It could have been delivered on Tuesday evening but I was waiting until pay day and paid cash on delivery. Delivery was just 60THB.

Mostly my attempt at online shopping was a success. We ordered 4 tins of tomatoes for bolognaise and chilli, but apparently in the whole of Tesco Lotus there were no tinned tomatoes so we received tomato juice instead. Needless to say I rejected this; my bolognaise would be way too watery! So as I mentioned, some things were ordered on weight…including carrots and chicken breasts; chicken breasts arrived successfully, we got 4, but I clearly over egged the carrots. I just wanted a few to finely chop and add to my cooking but when I added what I thought was the right amount it went into the basket as 7.5 THB (15p) so I upped the quantity to 34 THB and the biggest bag of carrots ever arrived. Oh well, I’ll just have to get creative!

Anyway, our online shopping was a great success and we will definitely be doing this going forward to save us lugging heavy shopping around.

The second exciting thing we discovered yesterday was a fabulous Indian in the food court at Siam Centre. We have had a few takeaways but as we live quite a way out of town they often arrive lukewarm, or when we’ve ordered local they’ve not been very nice. 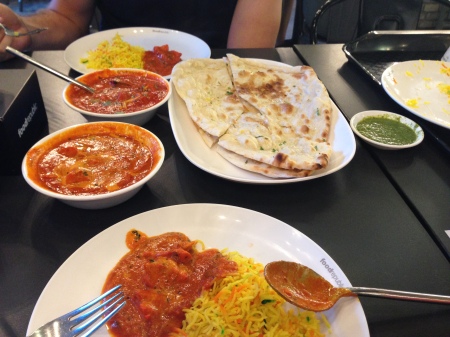 We had popped into town to go to MBK to get a rucksack for our island hopping next week and were going back and forth between eating Thai or western food when we walked past the Indian counter and the chap spoke to us. Having not had an Indian in a while and quite frankly missing it like mad (…we’re counting down until we can go to the Jamal in Leicester when we’re home in December!) we went for it.

We ordered a butter chicken, chicken tikka masala, two garlic naan and a saffron rice. Despite having meals on the counter it was all made fresh and Dave noticed they had a clay oven for the naan. It was served with a fresh mint dip and pickled onion, both were yum. The meal was fantastic, it really was. The sauces were rich and tasty, the chicken was breast not leg meat and had been cooked tandoor style first. And the naan was nice, less bready than I am used to but it was crisp and delicious rather than limp and damp as we have experienced. The whole meal came to 550THB (£11) and we were delighted to find out they have a branch in our nearby mall MegaBangna.

So Thursday was a good day food wise – we can now cook our own meals without having the trauma of getting to the supermarket and we found a fabulous Indian! Lets get eating!