Early on Tuesday afternoon we arrived at the port in Koh Lanta. We escaped through the throng of tuk tuk drivers, paid our 10 baht each to ‘keep Lanta tidy’ and spoke to a songathew driver whose van clearly had enough space for us and all our luggage. For 100 baht each he whizzed us to our hotel, The Crown Lanta.

This is a luxurious hotel perched on the northerly tip of the west coast of Lanta on its own peninsula. We booked it because there was a deal on making the rooms 2500 baht a night (fifty quid) so quite frankly, we couldn’t say no. Our rooms were the Gazebo Deluxe rooms situated above the swim out pool rooms and were beautiful. This also meant we had access to the 2nd pool in the resort which was really quiet.

The main pool and restaurant is up over a hill so to get around the resort you hop on and off the golf buggy type transport vans, seriously lazy but that hill was quite big and we did walk up it to breakfast in the mornings! Speaking of breakfasts, they were epic. Aside from the great range of cold stuff, fresh fruit, great breads etc there was an awesome pancake and waffle bar all cooked by the chef for you. We’ve had this in other hotels but the quality of the food at the Crown Lanta was fantastic. Check out my pancake…

The hotel had a swim up bar in the main pool which had happy hour from 4.30 – 6.30pm everyday. Needless to say we took advantage of this for the 3 days we were there!

That night we met up with some friends at the reggae bar in our resort for some cocktails (it was happy hour in that bar by then) and to watch the sun go down. That night was ate in the restaurant in our hotel. The others opted for steak whist I went for the pork, it was delicious. We ate sitting on the floor on mats with traditional triangular pillows, needless to say it didn’t take long for us to get comfy! 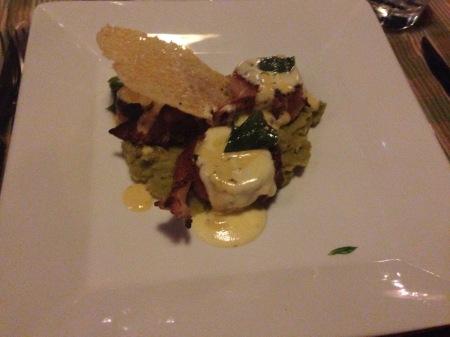 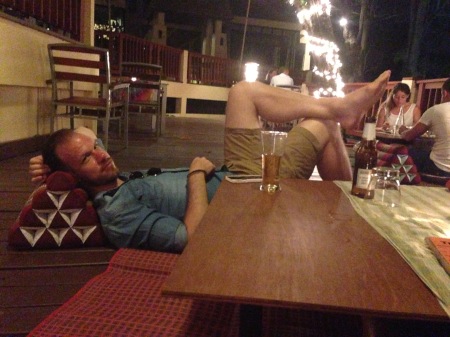 On Wednesday we took a tuk tuk down to Long Beach and had a wander. This is a really long, beautiful white sand beach with clear, turquoise water the temperature of a bath with some bungalow hotels and beach bars along but isn’t too built up at all. I was reading an article about how the local government are desperately trying to stop Lanta becoming a party destination like Koh Phi Phi or Phangan and I have to say they’re doing a great job. It seemed to me to be a really chilled out island with lots of nice places to eat and drink but not a huge amount of nightlife!

For dinner that night we went to the Fat Monkey (Ling Uan) which had been recommended. The menu is a combination of western and Thai, we had a variety of starters including Som Tum which made me realise my tolerance to spice has vastly increased given the looks of horror and watery eyes around the table as I tucked in! I had the burger for main which was good but not as good as a Daniel Thiager! Plus it was huge so I really struggled to finish! We had been told how good the desserts were, particularly the brownie sandwich so we felt obliged to try it despite our bulging bellies! Of course it was incredible but it definitely pushed us all over the edge! 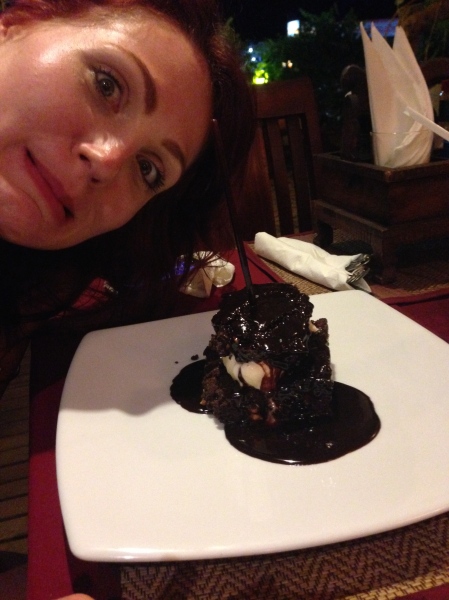 Thursday was a pool/massage/happy hour day! We had a lay-in and a leisurely breakfast before retiring to our sun loungers! We grabbed lunch at the hotel where I had a yummy chicken Caesar salad whilst the others sampled a variety of the sandwiches on offer. All of it looked good.

That night for dinner we took a tuk tuk to Red Snapper which had also been recommended, this was a fair old ride away but the tuk tucks here have seats built onto one side so 4 of you can comfortably fit! Ok so comfortably is probably a bit generous but it certainly is entertaining especially if you get a ‘pimped’ one! Tuk tuks here are pretty expensive compared to other places, especially Bangkok, a standard journey here it seemed is 400 baht, next time I think we’ll hire scooters to see some more of the island.

Anyway, back to Red Snapper. This restaurant serves tapas style dishes so we chose a variety off the menu including fried chorizo and garlic (so delicious), lamb curry, cheese and chill croquets, tamarind ribs and meatballs as well as good bread (always a blessing in Thailand). The main courses were really nice and we followed it by sharing a piece of chocolate cheesecake.

We were leaving for Koh Ngai the next morning, we booked our speedboat transfer through the hotel for 650 baht each. We could have done it for 500 baht and taken the ferry but the speedboat got us there in half an hour plus it allowed us an extra hour in bed! The price included collection from your hotel taking you to the port. The speedboat was similar to the one we went for the day trip snorkelling on except on this one they insisted you wear your life jacket…a little bit of health and safety! The journey to Ngai was really interesting; we saw mangroves and monkeys as well as fishing boats and a building on stilts being restored. 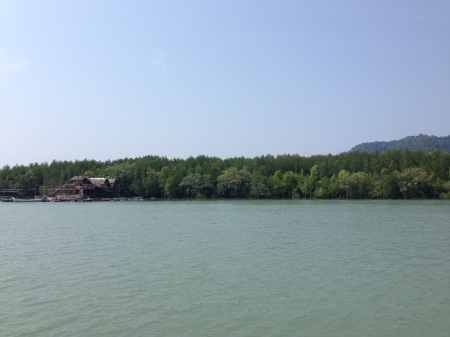 We only had 3 days on Koh Lanta but I am determined to go back for at least a week as I think it could be a firm favourite! It was simply beautiful with such a relaxed, chilled out vibe you couldn’t help but love it! We will definitely hire a scooter next time to venture down to the southern beaches which by all accounts are even more beautiful! And unless the Crown Lanta has a deal on we’ll be staying in a hut on the beach!

Tomorrow I’ll be filling you in on the paradise that was Koh Ngai…well Hannah did say she wanted a desert island, and I didn’t want to disappoint!

If you missed yesterdays Part 1: Railay, check it out here!