Last Sunday we weren’t really sure whether Songkran would have got underway in the city yet (officially running Mon-Weds) so we decided to visit Jim Thompson’s House for a bit of ‘quiet culture’. I took Han and Rich last month and loved it so was more than happy to go again this time with my parents and Dave. Because of Songkran the guides were all wearing flowery shirts and the compound was decorated in colourful bunting! There was also a performance of traditional dance which was really interesting for my parents. 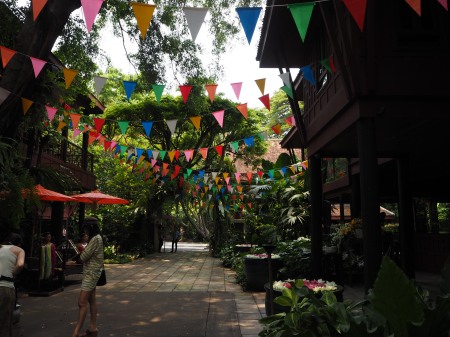 Extracting the silk thread from the cocoon 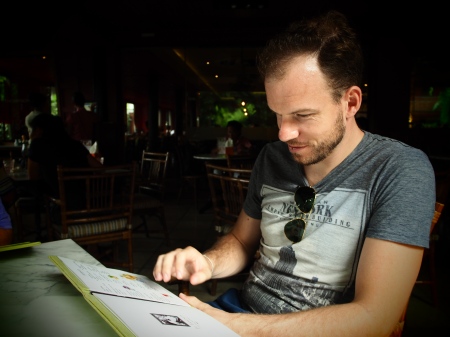 A quick stop in the cafe for some rehydration!

The parents first ever ride in a Tuk Tuk!

We then had a quick wander around MBK so mum and dad could see what was on offer to take home as gifts! It was so quiet it was slightly creepy!

Then we went to Sukishi to BBQ. This Korean restaurant is a great way to eat, with a charcoal grill placed in the middle of your table under a bronze extractor fan. We had a huge meat and fish platter to BBQ, as well as sushi, gyoza and at my dads request potato salad! It was a feast and with some exotic shakes was under £40. Worth noting that Sukishi adhere to the law prohibiting the sale of alcohol between 2pm and 5pm…not all places do! 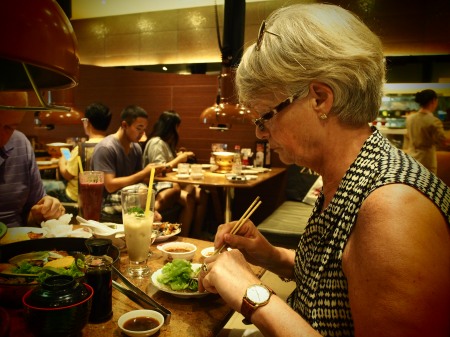 Next stop was Swensen’s, mainly just so I could take a picture of a sundae and send it to Hannah who has been having withdrawal symptoms since being in BKK last month but my parents really enjoyed it!

With full bellies, which mum and dad have now realised is an everyday occurrence in Bangkok, we headed home to pack for our 5 day trip to Koh Chang…island paradise!