Back in August, we did the Bangkok Food Tours Midnight Food Tour by Tuk Tuk with my sister and her boyfriend. I’d heard good things from BKK friends so was keen to give it a go after the great experience we had with the Taste of Thailand walking food tour which you can read about here. There was a special offer price on the Tuk Tuk tour at the time so we paid 1700 baht each instead of the usual 1900 baht.

The meeting point is at DHL at Chit Lom BTS station in central Bangkok at 8pm sharp, very easy to get to wherever you happen to be staying in the city.

We arrived about 7.50pm and were met by our lovely guide who for the life of me I can’t remember her name, apologies! joining us were four other couples from all over the world. We had a tuk-tuk per couple so the travelling was really comfortable and our guide had come prepared with ponchos for when the heavens opened! 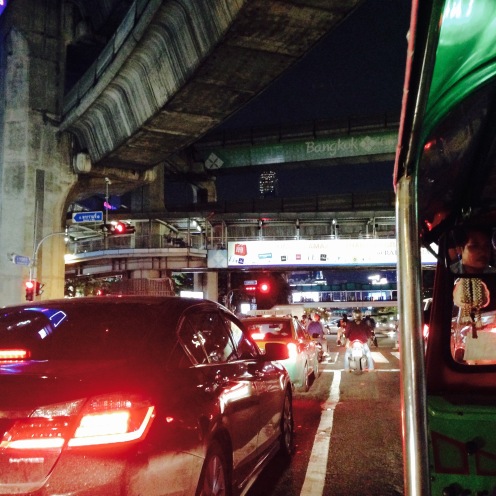 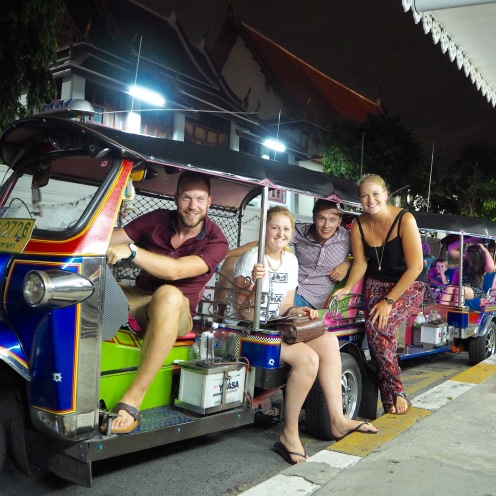 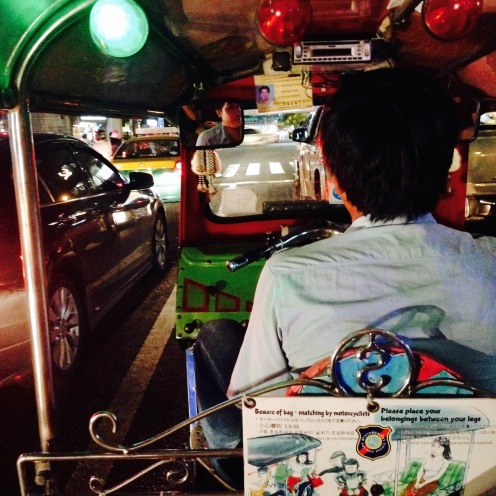 Settling into the drivers seat

First stop was the short walk to the tuk-tuks which led us directly passed the Erawan Shrine which was bombed just six days later. We went into the shrine where our guide told us some of the history about why the shrine was built there and the significance it has to the intersection. We arrived at our tuk-tuk and were introduced to our driver for the evening. My experience of tuk-tuks in the city isn’t great and I tend to avoid them entirely which is a real shame and another reason I was looking forward to this experience; no scamming, no rip-offs and no silk shops. We all hopped into our respective tuk-tuks and off we headed to food destination number one. 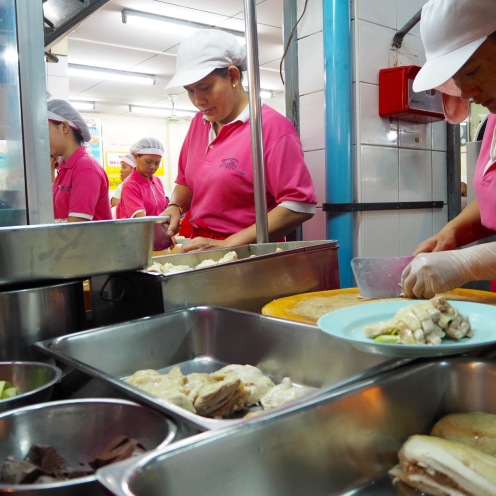 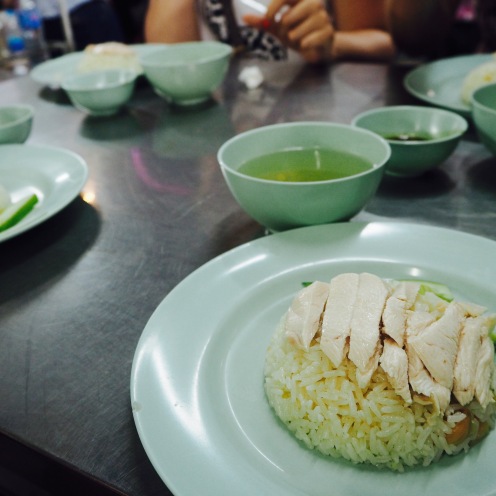 In charge of the chicken

Destination number one is said to serve the best Khao Mun Gai (chicken and rice) in Bangkok. The place was busy and we took our seat amongst the locals and waited for our food. Whilst not visually exciting, the dish was delicious; boiled chicken served on top of chicken flavoured rice served with a rich, tasty chicken soup. It was accompanied by one of my favourite Thai dishes Som Tam (green papaya salad) which provided a bit of a kick to the proceedings! To follow we had another of my favourites, mango sticky rice….sooooo good! 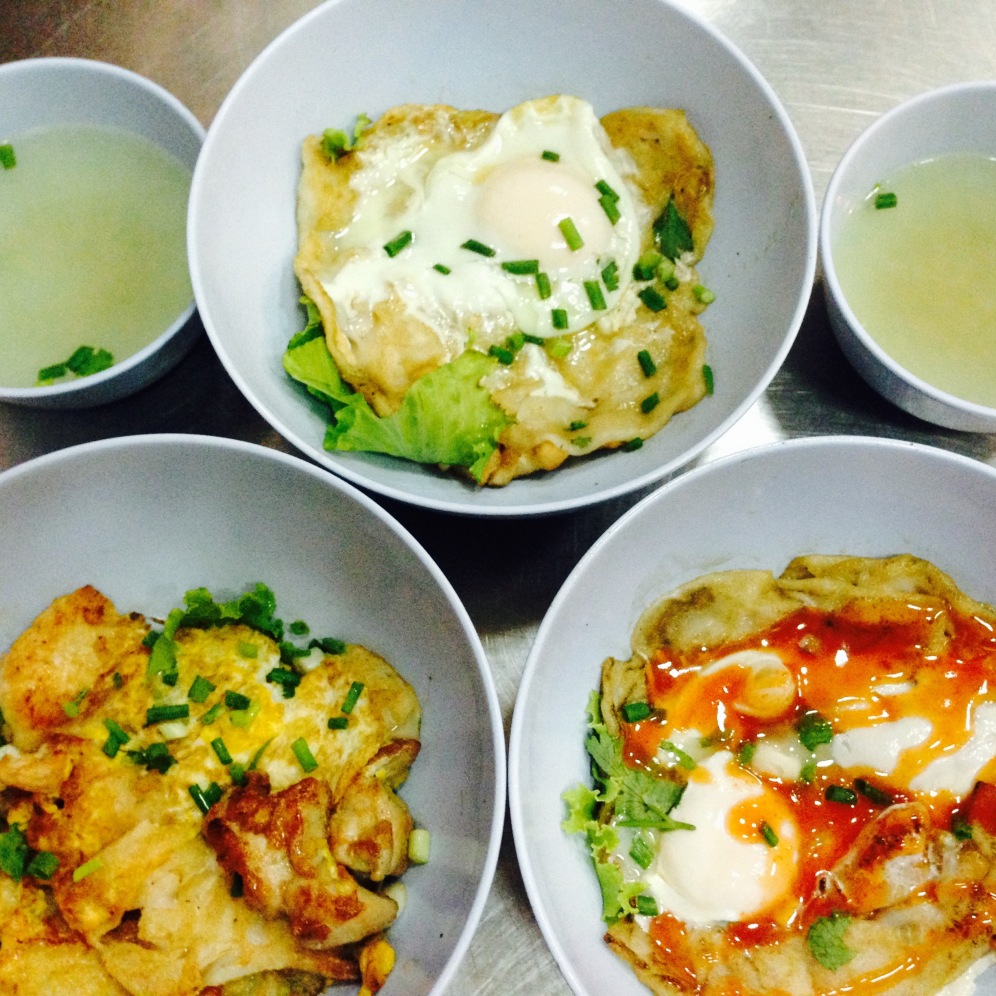 The owner of the restaurant

Next stop was a restaurant owned by ‘Ann’ which serves Guay Tiew Kua Gai (chicken, noodles and egg). There were two options with this one, runny or cooked egg, we got one of each to try. Our guide also suggested adding the popular Thai sauce Nam Prik, which I can only describe as a slightly translucent, more tangy tomato ketchup! I have a slight issue with uncooked egg white so for me my favourite was the cooked egg dish which was really good; the noodles have kind of a smoky quality from being cooked in such a scorching hot pan (see flames in the picture above) and I loved the slight crispiness on the chicken. Again, this place was super busy and it was really cool to be eating alongside all the locals.

I was really excited about the next place on our tour as it’s somewhere I have been meaning to go since arriving in Bangkok nearly 10 months ago and still hadn’t got round to; Bangkok’s famous flower market. The market is open 24 hours a day; we arrived about 10pm and it was still frenetic with activity as the following day was Thai Mothers Day and the Queens birthday. Our tuk-tuks dropped us at one end and picked us up at the other which was ideal. The range of flowers was incredible and the cheap prices just blew me away! If we hadn’t still had three more stops I would have been laden down with beautiful flowers! 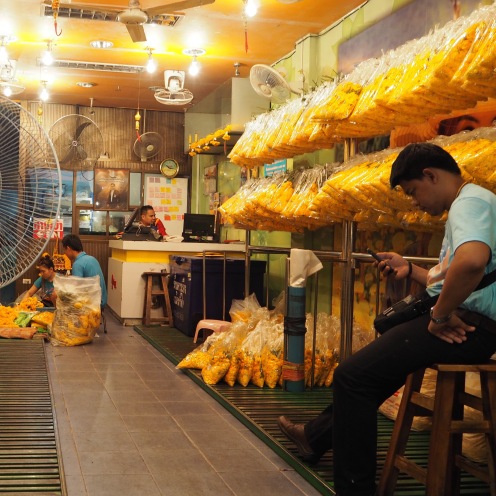 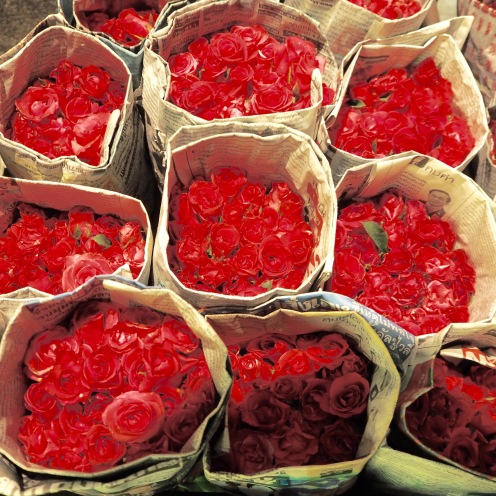 A lady hard at work

A sea of flowers 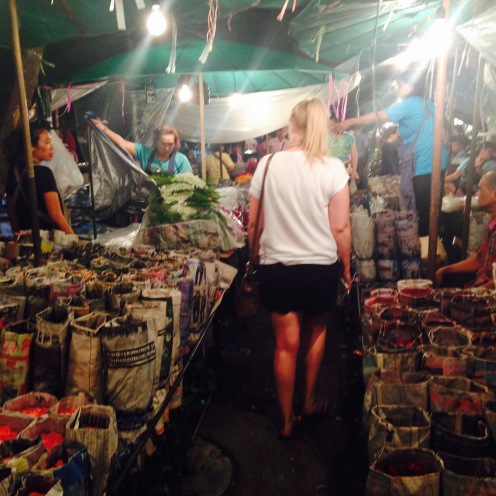 Walking through the flower market

Destination number four was another special one for me. If you read Travels of a Beauty Addict regularly you’ll know that my favourite temple in the city is Wat Pho, which since moving here I have visited I think 6 times now. This was to be my 7th and it was 10.30pm! We couldn’t go in to see the reclining Buddha but we were allowed to walk around the temple grounds and take as many pictures as we wanted, it was a fantastic experience! 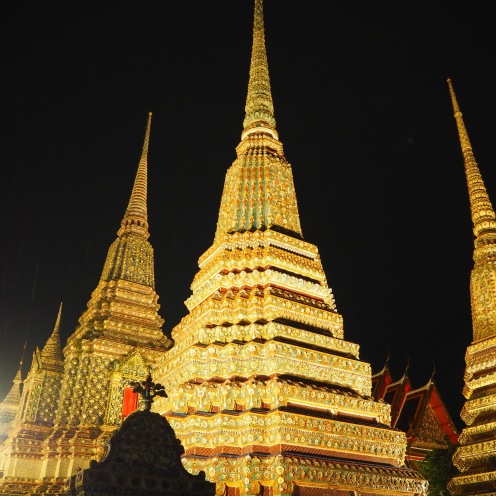 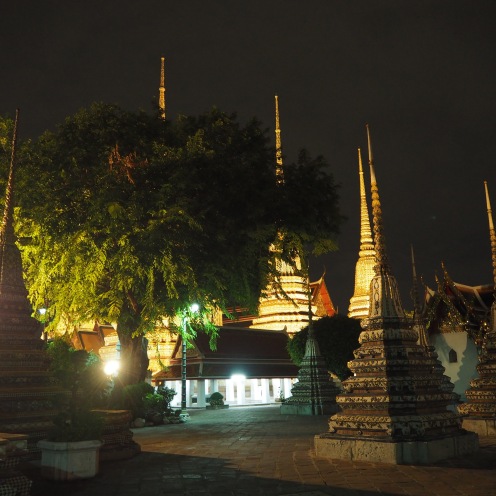 From here we headed to the ‘secret destination’ which if you did any research into this tour at all you will already know all about from the reviews on Trip Advisor, so I won’t attempt to keep it a secret here – if you don’t want to know, skip down a bit!

We were taken to Sala Arun on the Chao Phraya river which has a roof top bar overlooking Wat Arun and from where you can also see Wat Pho and the Grand Palace in the distance.We had a cocktail and admired the beautiful view whilst taking a few (largely unsuccessful) pictures! Our guide also gave us some Mangosteen fruits that she had picked up at the flower market to try, they have a hard purple shell but once inside the flesh is like a lychee so of course I loved them! 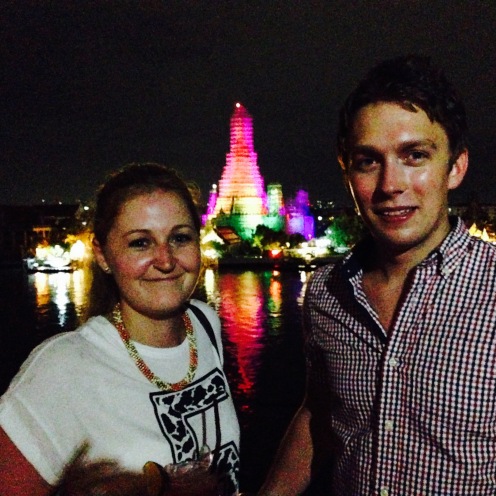 By this point I won’t lie, we were very full and we still had one more stop to go! We arrived at stop number 6, Thip Samai, at around 11.45pm as the rain really got going (well…it is rainy season). There was a gigantic queue still so we joined it and were thankfully dished out umbrellas by the restaurant staff. 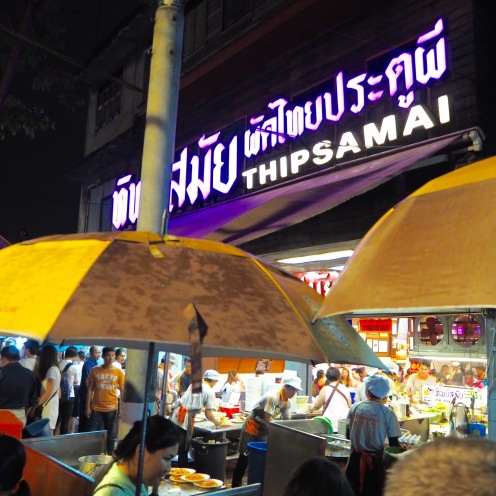 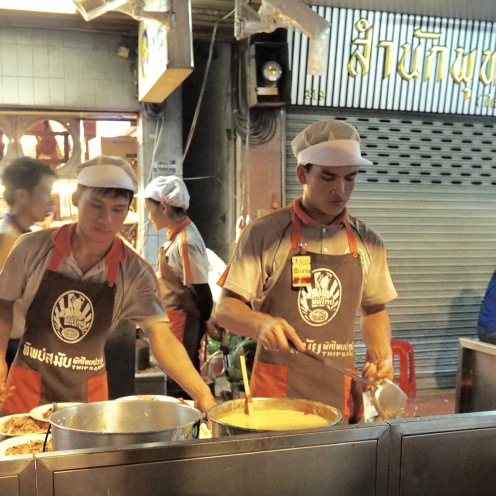 This restaurant has won lots and lots of awards from around the world for its Pad Thai. My stomach perked up and I was excited again! Thankfully we had to queue for around 25 minutes (ideal to let everything else we’d consumed that evening go down a little!) and the line probably doubled behind us, this is a seriously popular place! Once inside we obviously couldn’t all sit together so we squeezed on with some regulars and tucked into our Pad Thai. We had opted for the version not inside an egg case, I think it was food overload and tiredness kicking in as in hindsight we should have got one of each for testing sake! But anyway, I digress slightly; the pad thai was seriously good, so fresh and crisp, filled with the tiniest shrimps and juicy noodles. I topped mine with extra chilli, peanuts and spring onions, just how I like it.

Out on the street we had one last treat to round off the tour; Kanom Buang, a popular Thai dessert that you see all over the city being freshly prepared by street vendors. The combination of coconut cream, shredded coconut and egg yolk in a crispy, sweet taco shell has now become one of my favourite Thai things to eat. If you can eat them hot from the grill as we did, they are just one of the best things I’ve tried since being out here! 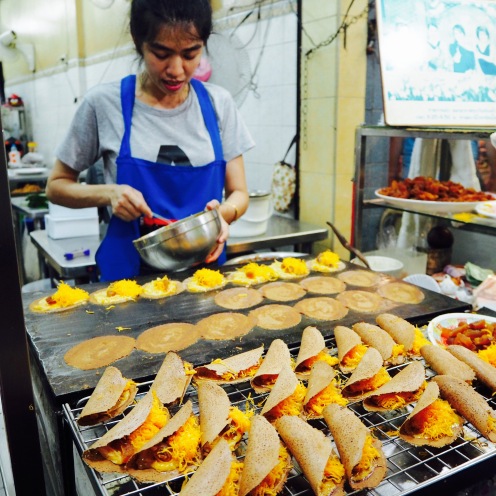 So that was the tour;  we visited restaurants we would never have found ourselves and ate some simply delicious food, and to top it off your tuk tuk will drop you off back to your hotel, in our case our condo which was a novel experience! Even as an expat there is something wonderful about whizzing through the streets of Bangkok late at night in a tuk tuk!

In comparison to the Taste of Thailand Food Tour I did back in April,  in all honesty it would be hard to pick a favourite. I like them both for different reasons and would do them both again! The walking tour took in more unusual food destinations I would say but the novelty of the tuk tuks made this tour just as special.